The Best Waterfall near Seattle

Seattle’s surroundings are home to some pretty impressive waterfalls, and we wanted to share some of our favorites with you. Here are listed top 10 waterfalls near Seattle: 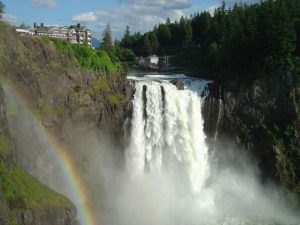 The Snoqualmie Falls may be visited from Seattle in under an hour and should be on the itinerary of any waterfall enthusiast! This beautiful waterfall in Seattle is a 270-foot waterfall surrounded by a two-acre park with an observation deck, gift shop, and Salish Lodge. Every year, over 1.5 million tourists visit the Falls.

This is unquestionably one of the most well-known waterfalls in Washington, with more tourists than almost any other natural feature in the state. When it comes to scenery, the falls aren’t bad at all. There are several fantastic viewpoints along the gorge rim and a steep Snoqualmie falls hike that leads down to the base of the cataract. The falls assume a Curtain form during high water. 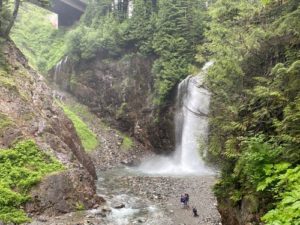 Waterfalls can be found relatively near to Seattle too. One good site parallel to National Forest Road, near Seattle, is Franklin Falls, an enormous flood of water cascades down the stones and reaches the natural pool. Consider going to Franklin Falls if you want to be amazed and swim.

The region contains three distinct tiers of waterfalls, each with its own set of picturesque views and lush plant life. This impressive waterfall is only an hour outside of the city. While it’s a prevalent location, it’s well worth the trip.

Located just approximately 2 hours from Seattle, Comet Falls is one of Washington’s most easily accessible waterfalls. The area around Comet Falls has long been known for its many hiking trails that allow visitors to soak up nature in all its glory.

This spectacular waterfall near Seattle plunges 462 feet from Van Trump Park in a 462-foot plummet, two minor drops below the main drop. Comet Falls was named after the resemblance of its tail to that of a comet. 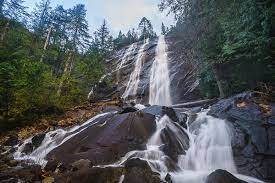 Located just an hour’s drive from Seattle, Bridal Veil Falls is a serene waterfall that cascades down the face of rock into a small granite bowl. Seeing Bridal veil falls is a guaranteed way to get drenched and smeared with mascara. Bring a rain jacket, just as with Lower Yosemite Falls. It’s a waterpark out there, after all.

The journey to Bridal veil Falls is little more than a stroll. A two-minute walk from the Parking Lot along a well-maintained track leads you to the base of the falls. The vacationers continue along the route, passing by roaring, rocky rapids flanked by a handy handrail to steady weary hikers. 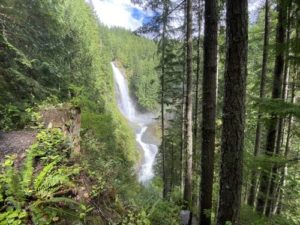 Another great waterfall near Seattle is Wallace Falls. This one of the best waterfalls near Seattle lies not far from Gold Bar; it lies within the Wallace Falls State Park. The origin of the name “Wallace ” is a corruption of Joe and Sarah Kwaylsh’s last name, Skykomish. It comes from the Skykomish tribe, the first settlers in the region.

Those hikers can do this hike with moderate fitness levels. It is 5.5 miles round trip but is well worth the hike with its fantastic scenery of the Wallace River and wildlife sightings. 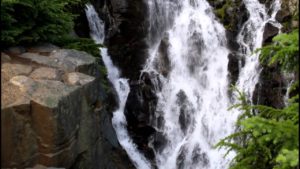 If you want to get the most out of your trip, go to Mount Rainier to see waterfalls. There are numerous waterfalls in the park, and Myrtle Falls is easily accessible while being quite lovely. It is located at a distance of around 107 miles from Seattle. So this one is a must if you’re already planning on going to the park. The beautiful scenery is one of the most photographed parts of the park, and it’s also a short distance from the falls.

You’ll walk eastward on a paved path for 0.4 miles from the Paradise parking lot on either the Skyline or Golden Gate trails. Take a stroll along this lushly wooded hike to appreciate the brilliant blossoms that line the route. However, be careful not to pluck any of them; they are for future visitors. 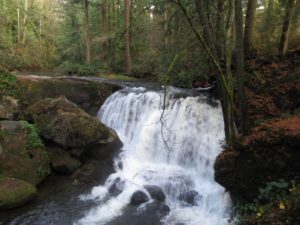 This waterfall near Seattle is easy to visit, but it’s definitely worth the effort to go and see it. You can enjoy the falls and a stone bridge erected in the late 1930s by a WPA crew. There are three and a half miles of pathways at Whatcom Falls Park. Some of the drive’s finest views are offered along these routes, which pass through the forests and overlook the creek gorge. Some wind rushes through grassy fields, while others remain in the depths of the woods. 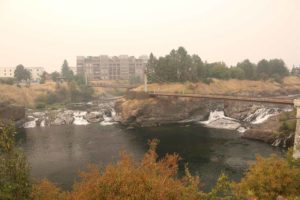 The Spokane Falls Trail is a 1.6 kilometer moderately trafficked loop trail in Spokane, Washington, with a waterfall and is suitable for all abilities. These falls are spectacular. The area adjacent to the falls has been developed without encroaching on the falls. There are various sections for viewing the falls, each reached by a different road.

The hike has a variety of leisure activities, and it’s best visited from March to October. Dogs may also access this trail, but they must be kept on a leash. This waterfall is approximately a four-and-a-half-hour drive from Seattle. 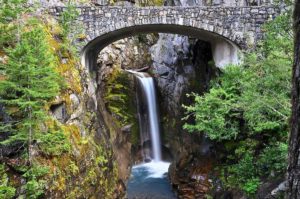 The historic, arching Christine Falls Bridge frames the magnificent panorama of the lower falls. The falls plunge 69 feet in two 32- and 37-foot drops. These falls are one of the city’s finest and most accessible waterfalls. It can be reached within a two-hour trip from the Seattle city center.

The upper portion of the fall is less apparent. Nearby, in the vicinity of Paradise, you’ll discover this delightful find. There is enough free parking at the falls. 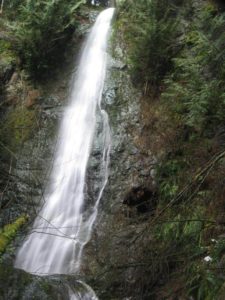 Explorer Falls is a waterfall located within the Lake Chaplain Watershed, which serves Snohomish County and Everett. This incredible waterfall in Seattle plummets to the valley floor after crashing over a series of dramatic cliffs. The hike to Explorer Falls is accessible for all skill levels and is about five miles round trip.

This is a waterfall near Seattle, located at a drive of one hour, so this one shouldn’t be missed out on. The falls are most amazing after a good rain, but you’ll be rewarded with an equally enchanting view any time of year.

After all this, you might want to take a break from the city and head out into nature. There are plenty of spectacular waterfalls near Seattle that can give your brain a much-needed reset after all those hours at work or school! If you’re looking for some inspiration, check out our list of 10 waterfalls in and near Seattle below. These spots offer everything from secluded trails to kid-friendly destinations with picnic areas if you need to refuel before continuing your journey! We hope these suggestions will help explore Emerald City more enjoyable with the best waterfall in Seattle. 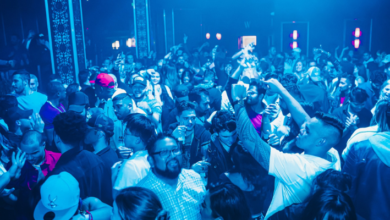 Sarajevo Seattle For The Amazing Nightlife 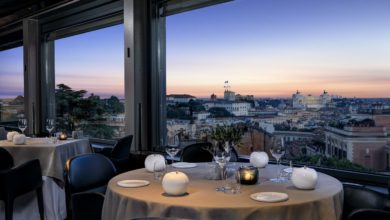 6 Restaurants in Seattle With A View to Enjoy 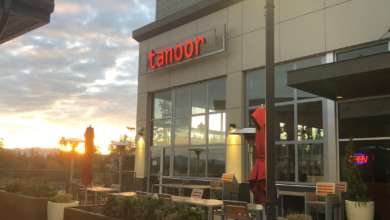 Tanoor Seattle For The Best Cuisine 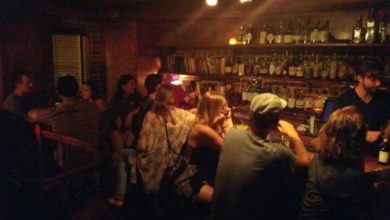 7 Amazing Bars in Seattle To Hang Out