Chicago is a bustling city with plenty to do and see. What better way to spend time than by taking in the views from one of the Tallest Buildings in Chicago? Here are some of the most amazing, accessible, and beautiful skyscrapers that you can visit. These towering structures will give any visitor an unforgettable experience. Whether you’re looking for a great view or just want to explore these architectural marvels up close, these tall buildings have something for everyone!

So let’s look at some of Chicago’s tallest buildings and what you need to know about them. These are the buildings that have lived through the test of time and architectural advancements.

Standing the tallest among all in the heart of downtown Chicago, Willis Tower is a 108 story skyscraper built-in 1974. Touching the highest point of 1,451 ft, it is the second tallest building in the US second to One World Trade Center in New York City. Formerly known as Sears Tower, it was constructed as the headquarters of the retail company Sears. The tubular construction technique utilized by Engineer Fazulr Rahman Khan and the architectural brilliance of Bruce Graham adds to its beauty and structural sturdiness.

The Willis Tower Skydeck on the 103rd floor gives Chicago the highest observation deck in the US. On clear days, the Skydeck extends the view over 50 miles as far as Wisconsin and Michigan. The observatory deck welcomes over one million visitors every year. You certainly cannot miss this one because no matter where you turn this iconic architectural marvel will catch your eye! 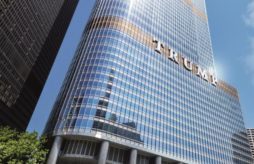 Named after the 2016 US Presidential Election Winner Donald Trump. The Trump International Hotel and Tower is a somewhat new entry in the tallest buildings in Chicago. The three setback design provides visual continuity aligning with the height of nearby buildings: the Wrigley Building, Marina City, and 330 N Wabash.

Making an announcement in 2001, Donald Trump intended this skyscraper to become the tallest building in the world. But after the 9/11 terrorist attacks, several changes were made to the designs and when topped out in 2009, the 98 story building turned out to be the second largest in the United States. However, it did break the record of the world’s highest residence surpassing the John Hancock Center which held the record since 1969. Currently, It is the seventh-largest building in the United States and second-largest in Chicago.

St. Regis Chicago is the latest addition to the Chicago skyline. With the construction marking its end in 2020, it surpassed the third-tallest building, the Aon Center. Currently, It is the 11th tallest building in The United States. Designed by architect Jeanne Gang, head of Studio Gang Architects. It is the tallest structure in the world designed by a woman.

The total height of the building reaches up to 1,198 ft with the curvilinear design consisting of three interconnected towers of different sizes giving it a step-like appearance. Having the wave-like structure and different shades of the glass adds internal room and also gives it a distinctive look. The 101 story building hosts 393 condominium residences, and around 191 hotel rooms, including 33 suites. The building also features rooftop gardens.

Hirsch Bedner Associates designed the Condominium interiors while the hotel interior design was taken care of by San Francisco firm Gensler. In 2020 the Magellan Development Group acquired the project and will open the hotel areas in 2021. 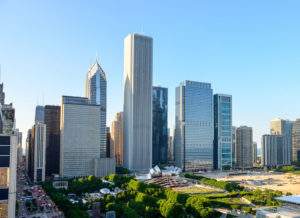 The Aon Center is an iconic Chicago landmark that you wouldn’t want to miss. A brainchild of a partnership between architect firms Edward Durell Stone and The Perkins and Will, it is one of the tallest buildings in Chicago. It marked its addition to the Chicago Skyline in 1974 and It was originally designed as the headquarters of the Standard Oil Building of Indiana. This 83-floor skyscraper reaches up to 1,136 ft and is the fourth largest building in Chicago.

Initially, it was the world’s largest marble-clad building, encased with 43000 Italian Carrara marble slabs. This design decision later proved to be fatal as the Windy City blew a 350-pound slab during construction. To keep the marble slabs in place stainless steel straps were utilized but later the entire building was refaced with white granite. For this around $80 million were spent, almost half of the original building’s cost. In 2018, plans for constructing an observation deck featuring a thrill ride were introduced and it was expected to be completed in 2022 but the construction was delayed a year due to the pandemic. 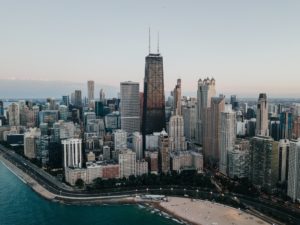 Situated in the Magnificent Mile district, the 1,127 ft skyscraper Is the 13th largest building in the United States. This 100 story skyscraper is a splendid work of architecture and at the time of its completion it contained the highest residence with around 700 condominiums, and it was the first-ever building in the world to reach 1,000 ft outside of New York City. Its name was changed to 875 North Michigan Avenue in February 2018, however, the locals still refer to it as the John Hancock Center.

The building also features America’s highest indoor swimming pool in the 44th-floor sky lobby and a restaurant on the 95th floor. However, the major highlight of the skyscraper has to be the observatory deck (360 Chicago) on the 94th floor. The observation deck offers a 360° view of the city that extends over 80 miles as far as the four states. The 360 Chicago features an innovative tilt, a moving platform that gives visitors a sight to behold nearly above 1,000 off the ground.

It might also interest you t know more about the SOHO House Chicago. 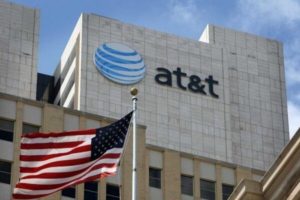 Designed by Skidmore, Owings & Merrill, the skyscraper was completed in 1989 as the headquarters of American Telephone & Telegraph Company (AT&T) and was the tallest in Chicago in the 1980s. In 2004, It was acquired by Tishman Speyer and in 2007 the name was changed to Franklin Center. Reaching up to a total height of 1,007 ft, Franklin Center is still standing tall among the tallest buildings in Chicago. Due to its massive structure and distinctive design, this 61 story building is the most recognizable landmark of Chicago.

The postmodern architectural design features strong vertical lines, setbacks, spiked roof pinnacles and an attractive finishing of granite cladding. As we go from the bottom towards the top, the granite cladding changes its shade from deep red to rose-beige. It’s a steel-framed building and the setbacks at the 15th, 3th and 45th floors combined with the shade changing clad give the building a uniform and a unique look. 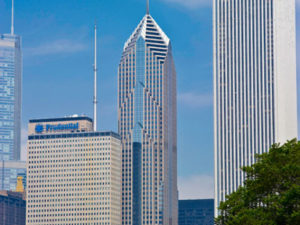 The construction of Two Prudential Plaza started in 1988 and it touched the Chicago skyline for the first time upon completion in 1990. With just a 5 ft difference from joining the 1,000 ft buildings club, the Two Prudential Plaza goes up to 995 ft but is lacking in no way. The design was undertaken by the architect firm Loebl Schlossman & Hackl and the designing head Stephen T. Wright incorporated stacked chevron setbacks on the north and south sides and a pyramid peak giving the building a modern and unique appearance. It was connected to One Prudential Plaza in 1992.

The 64-floor skyscraper has received 8 awards over the years one of them being the award for the Best Structure Award from the Structural Engineers Association of Illinois which was received In 1995. The building also appeared as Rich Industries Inc. in the Richie Rich movie of 1994.

Chicago has the highest skyline in America only second to New York City and it includes many of America’s highest peaks. So, whether you were looking to add another spot in your trip to Chicago or you wanted to marvel over some of the architectural achievements celebrated and aged in the Chicago skyline, we got you covered.

In the article above, we talked about the 7 tallest buildings in Chicago and the things you should know about them, and with this, our little expedition through Chicago’s Tallest buildings comes to an end. 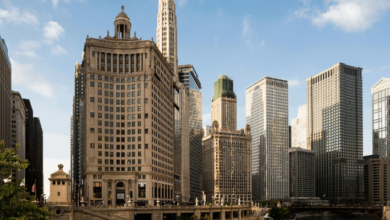 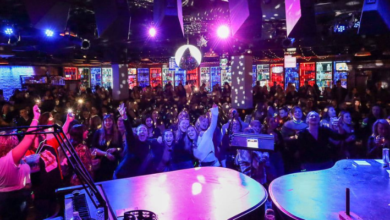 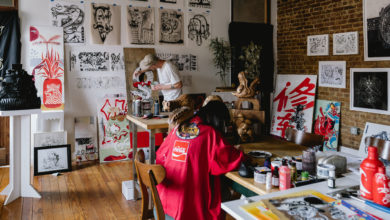 9 Best Tattoo Shops in Chicago to Get Inked 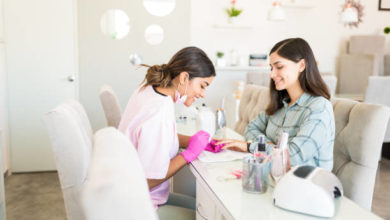 7 Best Nail Salons in Chicago to Pamper Your Nails